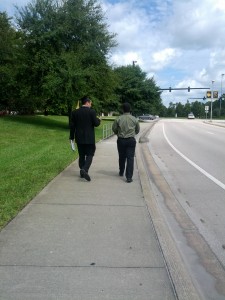 How many of you are thinking about this or something similar, yet don’t know where to start?  Even worst, you will simply let it slide and won’t act on it altogether?

My point is as follows:

This year I promoted a good friend of mine to 6th degree black belt.  That by itself is quite significant as I have only promoted a little over twenty black belts in over forty (40) years as an instructor.  During his test he demonstrated several self-defense techniques, fought a couple of times and performed techniques that anyone out of shape wouldn’t have been able to keep with him.  He also had two twenty year (20) old black belts working with him during part of the test cycle and even them were winded at the end of the test.

I also promoted another gentleman to a first (1st) degree black belt.  This one in particular is over fifty years old and his test was quite a challenge by itself.  He demonstrated self-defense techniques against weapons and multiple attackers.  He also broke boards using many techniques and showed a remarkable physical condition as he demonstrated the kicks and fighting forms he learned.

Both of them loss weight, learn how to defend themselves and hare not afraid of taking control of their lives.  Neither one of them is that much different from you and while one of them started a long time ago the other one was already middle age when he embarked on this journey.  So what are you waiting for?

Tomorrow is a new day and in my book is the perfect time to start living a new life.