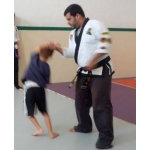 Small children are our treasure and as a parent there is nothing we will not do to protect them. Yet we live in a dangerous world and there is only so much that we can do for them at any point in time.

It is actually interesting when I hear of an incident where children get hurt and the reactions of the grown-ups.

Some have actually said; “I learned karate as a kid and I’m going to teach them some moves”.

Others may not be as bold but will still bring their kids to a “karate” school so they can learn how to “kick butt”.

The problem is that younger kids are not wired that way and presenting information before they are ready could actually do more serious damage to their psyche than the desired outcome.

As a matter of fact, the basic impulse in most individuals is to flee rather than to fight so we are fighting against nature.

Another key factor that the majority of the population may not know is that it takes years for any martial arts training to become second nature.

For example, think about martial arts training as music training. The fact that you put an instrument in the hands of a kid doesn’t mean that he will become a virtuoso in a matter of weeks.

There is muscle training, theory of the music, and many hours of practice. The same is true with martial arts training where it takes years to master one simple technique.

Another point to consider is the curriculum of the school as different schools emphasize different aspects of the martial arts realm.

For example, at my school we emphasize three basic concepts: conditioning, coordination and self-defense. Eventually every one of our students learns how to fight but this becomes more of an automatic reaction than a conscious effort.

This is what I call the dragon techniques where the defense becomes the offense.

Anyway, my point is that while we want to protect and give the tools to our kids to protect themselves let’s make sure that we give them the right tools at the right time.

So in our case, we will emphasize more games where kids will learn the basics of survival and more exercises where they will develop muscle memory.